The August winds have blown us right through September and all of a sudden we’re half way through October. Now the famous Valley heat is starting to set in! The change in the season has resulted in an increase in thirsty animals. Eland drink at the spring everyday and there are countless numbers of impala, kudu and warthog at the pan during lunch time. Elephant cover the pan during the evening and keep our guests up with the splashes and trumpets.

The bird life at Kavinga has been fantastic. We have had regular sightings of the Yellow Billed Stork and Broad-billed Rollers. Carmine Bee-eaters decorate the bare trees like bright colored Christmas decorations. The Greater Painted Snipe is an exciting bird to tick off the Kavinga Bird List, and we have three of them at the pan as well as a flock of Southern Pochards in the pan! It won’t be long before we can start ticking off the African Pitta too. Eastern Nicators and Red-throated Twinspots sing in camp, while the White-Headed Vultures build their nest by the spring.

The lions have had us tracking them in circles and are now in the Chewuye Gorge with the cubs where they had killed a young elephant. The Wild Dog have not been seen for some time- since we noticed four of the pups were no longer with them.
The Baobabs have started flowering already along with a couple  of other trees that only normally flower much later in the season.

Some pretty strange and early changes this season, including some Leopard Tortoises walking about and Egyptian Geese passing through. We’re excited to see what the rest of the month has to offer!

Take Care of Yourselves,
Siraaj 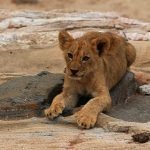 A Once in a Lifetime ExperienceCamp News