We have had an eventful 16 hours at Kavinga! On the afternoon game drive, our first sighting was our pair of resident Side Striped Jackal lying in grass opposite camp in the shade.
The drive was rather quiet, a few impala and a couple herds of elephant, and some entertainment watching my guests swat the tsetse flies off each other. I got out my trusty tin of burning elephant dung, to deter the tsetse flies before anyone got hurt! Just around the corner in the riverbed was our pride of lion, where we spent the rest of our afternoon with a Gin and Tonic and a beautiful sunset on one side, and16 lions on the other side. All eight cubs were present, playing and swatting at the adults flicking tails.

After leaving the lions and on our way back to camp we saw more elephant, the small family of zebra and a hyena drinking at the camp pan. Caitlin came to welcome us back from our drive and whispered to me that we had just missed a leopard drinking. It was chased off by a hyena as she was about to radio us to come take a look, probably the hyena we saw, so we missed that by a matter of seconds!

At dinner, with the glowing light from the full moon and watching the silhouettes of elephant drinking and mudding themselves between courses, we planned our activity for the next mornings adventure. After seeing how excited my guests were, I suggested we do a walk the next morning and check out the hyena den.

At 5:15 we were all up. Having our cup of coffee and sharing stories about what sounds we heard during the night, we suddenly heard some growling opposite camp which were no doubt our lion pride squabbling over the remains of something they killed during the night. I decided the lions had food and wouldn’t be moving anywhere in a hurry, so we would be able to investigate that kill later: we had some hyena to see!

We snuck in close to the hyena den just minutes before the sunrise. Normally I would see a couple of the hyena cubs running around at the entrance to their burrows before we would even get there, but this time-nothing. Pressure started building up when I looked back and the guests were looking around wondering why I had stopped. Then as I was about to apologize and say it doesn’t look like they are here I heard someone say, “There there whats that?”
It was a Honey Badger only a couple of meters away scampering towards us, he stopped for a moment to look at us. He obviously didn’t think much of us and continued on his way into the hyena’s burrow. I thought this was very strange so we moved to the top of the ridge to see if maybe the hyena would chase the Honey Badger out of their den. Instead one of the hyena cubs came running down past us and slid into the same hole the Honey Badger was in!

Absolutely amazing! That was the highlight of my day, and it was only 06:07 a.m. We had plenty of time and good photographic light to go find out what the lions killed last night!
We drove across to where we thought we herd the growling and there they were. 16 lions lying in the river bed. The pride had killed a baby elephant and were just finishing it off. After they had eaten what they could of the kill, the lioness with the four youngest cubs began to make her way up the bank followed by some of the other lioness and older cubs. Two lioness and one of the smaller cubs stayed behind chewing on the left overs, the little cub looked up and realized he was about to be left behind but when he tried to catch up, he was too afraid to cross the water. He began to call for his mother. Eventually he walked across and up the ridge only about 50 meters from the pride. He called and called while the other two lioness were still at the bottom by the carcass. His mum walked half way back to the cub, but the little cub didn’t see her and ran off calling desperately…in the opposite direction!
The two lioness at the carcass finally got up had a drink and walked up the ridge towards the rest of the pride. They called and I thought ,”yes this is it!” the little guy is going to find his way back to the pride but he didn’t hear them and they walked off without even stopping and looking back.

Luke  found the pride in the riverbed- all except one. Who was still running around in a panic at the spring, we began to get worried, waiting patiently for the mother to come back while we heard the cubs call for his pride grow fainter as he went further towards the thicker bush in the opposite direction for cover.
According to the law, we were not allowed to intervene with the wildlife, as hard as it is, we must leave nature to do its thing. There was nothing we could do except wait and hope the cub would be found by its mother later this afternoon when it cools down and the wind stops.

So far today has been a mix of emotions for me, from having a successful morning and an early high light with the Honey Badger and hyena cub and lion kill- to leaving us all worried and waiting in suspense .
Okay readers, long story for today! I’ve got to go off and take an afternoon drive. My day isn’t done yet but I will get back to you soon about the lion cub- Hopefully with some good news!
Fingers crossed.
Cheers for now,
Siraaj. 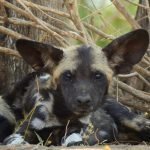 Who let the dogs out?Camp News
The Cub Returns!Camp News